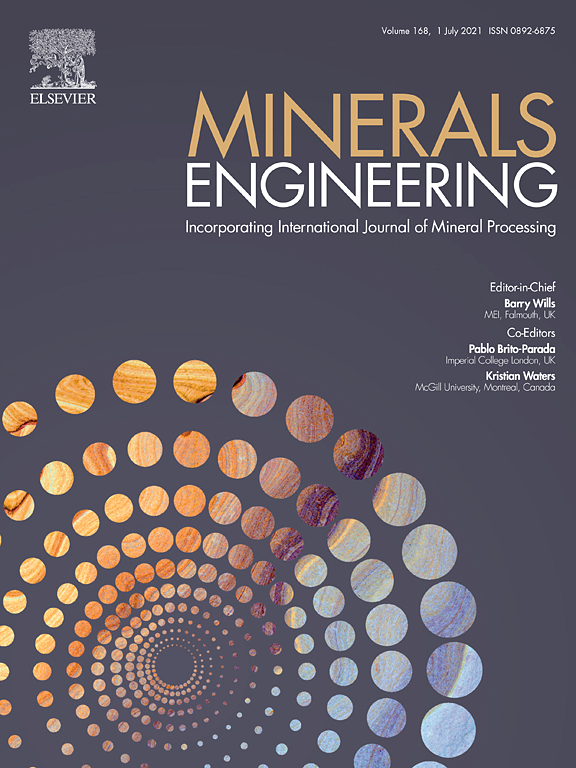 The effect of feed chute design on tertiary cone crusher performance at the Sarcheshmeh copper complex was studied by an in-house developed DEM software called KMPCDEM©. To simulate the overall crushing circuit, the multi-geometry procedure by improving the routines of object files importing into the simulation environment was implemented in DEM codes. The calibration of DEM parameters was performed using the observed angle of the pile formed on the conveyor (surcharge angle). Various feed chute designs were then employed in the simulations based on an experimental design to find more uniform feed distribution on the distribution plate of the crusher. More uniform feed distribution was obtained by changing the shape of feed chute from cubic to cylindrical, decreasing its surface area from 0.34 to 0.24 m2 and increasing the cylinder length above and below the feed chute plate from 0 to 45 cm and from 53 to 74 cm, respectively. This was verified by proximity of center of the mass of distributed feed to the center of crusher distribution plate. After installing the new feed chute design in the plant, a detail monitoring over a period of 15 months showed a reduction of the standard deviation of crusher power draw from 13 to 3 kW. A better crusher control, 36% increase in the crusher throughput and finer and narrower product size distribution were among the main outcomes of the new feed chute. It was concluded that the wear rate on mantle and liners of crusher not only decreased but it also became uniform.